The Importance of Rituals

Genevieve shares with us the importance of rituals

"Previously, I hadn't found ceremonies around loss particularly helpful. While respecting the cultural importance and religious significance of grieving rituals, I hadn’t experienced their healing power. Until now. On reflection, I think the key for me was in the timing. "

Last century, while at medical school, I studied the various models of grief.
here was a 5 stage model, a 7 stage model, the Kübler-Ross Grief Cycle and a couple of others, the details of which didn’t deposit firmly enough in my memory bank to now recall.

Being young and eager to know “the answers”, I asked “But which model is right - which one most accurately describes the grief process?”

Grief is messy. There is no right or wrong.  There is no neat stepwise process or clear signposts along the road.  Everyone does it differently.

I learned about Grief’s complexities and idiosyncrasies firsthand, very soon after medical school.  In the November of my intern year, my partner, Adam, died of testicular cancer.

I continued to get better acquainted with Grief over the next 15 years, thanks to multiple personal losses, including five miscarriages.  So when I lost my infant daughter, Amalie in December 2014, I thought I knew what to expect.  But as it so often does, Grief threw me a few curve balls.  I discovered that not only do different people grieve differently, but that individuals grieve differently at different times.

Previously, I hadn't found ceremonies around loss particularly helpful. While respecting the cultural importance and religious significance of grieving rituals, I hadn’t experienced their healing power. Until now. On reflection, I think the key for me was in the timing.

Within a couple of months of losing Amalie, life around me had ostensibly gone back to normal. Most people were treating me as if nothing had ever happened. In a way that was good, as I didn't want to be wrapped in cotton wool, but on the other hand, it accentuated how far from normal I felt. I often felt quite isolated, cut off from the world as if I was trapped in a Perspex container watching everyone go about their daily lives but not being able to connect with them. The colour had been washed out of my life. I felt flat and empty.
Then three months after Amalie died, my colleagues organised a tree planting and memorial service.  After getting council approval, we planted a coastal banksia tree in parkland near where I live. 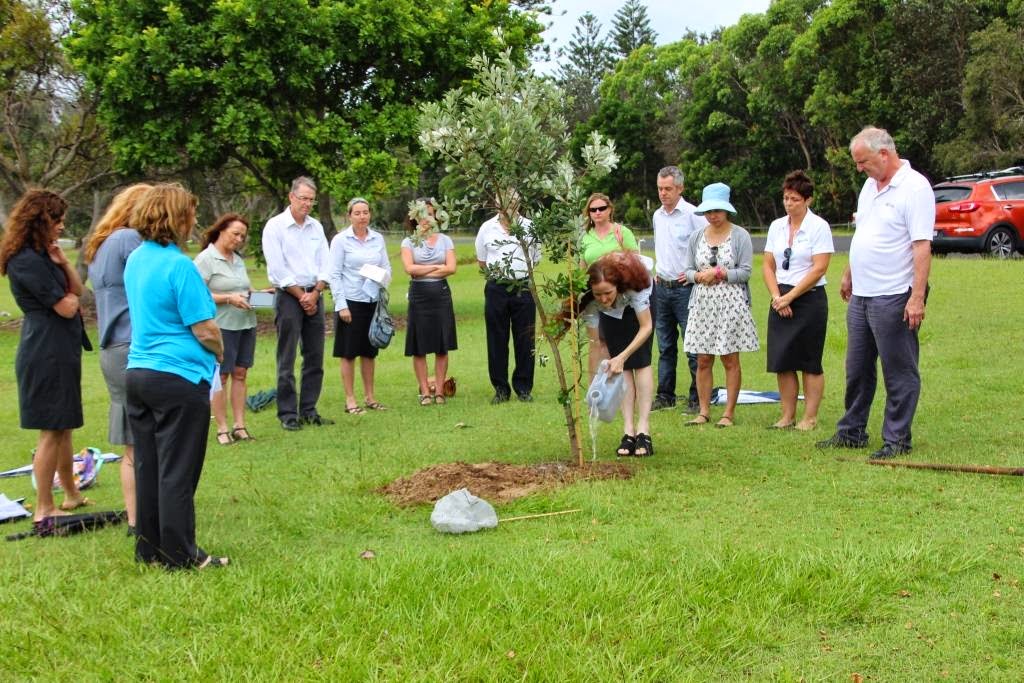 It was a really beautiful service. A few people talked and many people cried.  The skies cried too (a few brief showers which gave way to sunshine) and the birds sang.  I scattered some of Amalie's ashes in the roots of the tree as it was planted.

It was an exhausting day but the ceremony was exactly what I needed at the time.  As well as the symbolic value, it reminded me that people really do care - the love and support by those present (in person and in spirit) was palpable, and it meant the world to me.

After feeling increasingly disconnected, the emotional distance between me and those around me was all but obliterated.  Connection is a powerful healer indeed.

I’ve been visiting Amalie’s tree daily since the service. Visualising her ashes being incorporated into the root system of the tree as it grows and strengthens is comforting and meaningful beyond words.

I've woken up each morning since the service feeling that little bit lighter and more positive about the future.  I know there are still hard times ahead, but I'm ready to face them, knowing my family, friends and colleagues are there to help me through them and to catch me if I fall.

I still don't have any answers for my past-medical-student self, but I feel I've got to know and understand a new facet of the complex creature that is Grief, and for that I am grateful.

Genevieve is a GP, medical educator, medical writer and musician from the Northern Rivers region of NSW. After a long and difficult road to motherhood, her beautiful daughter, Amalie Ella, was born in December, 2014.  Tragically, Amalie died of neonatal sepsis after only four days.
Through her clinical work, teaching and writing, she hopes to she can use her experiences to help support both patients and other doctors in managing the complex emotions surrounding fertility issues and perinatal loss, and also encourage more open discussion in the general community.

Her website can be found at: http://genevieveyates.com
Posted by Sands Australia at Thursday, April 30, 2015